Hello everybody and welcome to our first blog. As executive director and founder of the Colorado Adaptive Sports Foundation, I want to share why I started this foundation.

This blog will serve as a place for open and candid conversations about disability, adaptive sports and how being an adaptive athlete effects my life and the lives of those around me. I encourage comments to this blog if you are moved by anything you read, either in support or in opposition of the post. If we do not engage in open conversation and present everyone’s side of a topic, then we can not grow from the experience. 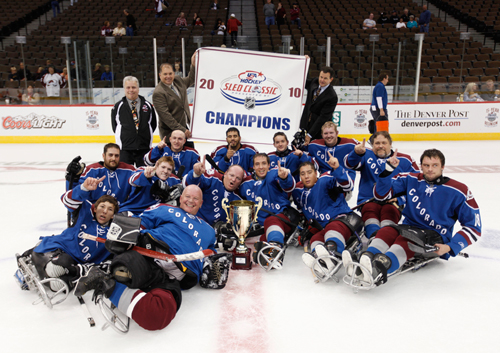 Why Colorado Adaptive Sports Foundation?
The concept started in 2004 when adaptive team sports in Colorado were really beginning to shape and grow. Sled hockey, basketball, softball and rugby were being played by dozens of people with physical disabilities. Each of those programs were running separately as their own individual non-profit groups with their own small boards (typically consisting of a couple athletes (and one or two outside individuals). The teams were doing it’s own scheduling and fee negotiations with facilities and had it’s own fundraising campaigns and agendas. The directors of each of these programs noticed that there seemed to be much overlap in these efforts and in many cases, we were competing against each other to secure financing or attract the sponsor. The directors decided come together and form a group where these issues could be addressed, share best practices and collaborate on fundraising efforts. After all, many of our athletes crossed over with each other and played on multiple teams. It made sense that we work together.

The initial group consisted of Larry Sidebottom (basketball), Jason Regier (rugby), Mike Wheaton (Softball) and myself representing sled hockey. Thus, Colorado Wheelchair Sports was formed. We were able to successfully work together for a couple years streamlining procedures for fundraising, athletes recruitment and raising awareness about physically disabled athletes. We all had full time jobs and the economy was beginning to collapse resulting in fundraising dollars drying up and in 2006 Colorado Wheelchair Sports closed its doors.

In 2009, I was laid off from an architecture firm in Denver. The national economy was heading into a major recession and most of the building construction had come to a stop, resulting in thousands of architectural jobs eliminated. In an effort to figure out what I was going to do, my thoughts returned to Colorado Wheelchair Sports. I spent the next couple of months talking with the directors of each the teams that remained, many of the directors being different than those we worked with in 2004, I explained the concept ready for redevelopment.

I began with changing the name of the organization. The name, Colorado Wheelchair Sports was limiting and may distract some of our most talented athletes from joining. Then the word Adaptive was substituted into the title thus creating the Colorado Adaptive Sports Foundation. “Adaptive” as a term has become a more recognized standard around the country to include all people with physical disabilities, not just athletes that utilize a wheelchair each day.

What is Colorado Adaptive Sports Foundation?
CASF is the administrative branch for all team sports programs in Colorado. We take care of the team administrative. This includes public relations, media connections, fundraising, grant writing and corporate relationships. As we begin our fourth year, we are poised to reflect on what we’ve accomplished. We developed a fantastic board of directors as well as an Athlete Advisory Council. Our grant program is starting to gain momentum and the athletes we serve are beginning to benefit from the support given to their teams.

Thank you for your time and support. We are always looking for volunteers, sponsors, donors and fans. If you are interested in getting involved, please contact me and I will find the best way to get you involved.

Everyone Deserves to Play Sports