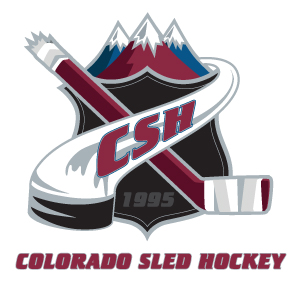 Sled hockey is the adaptive form of ice hockey, and is a fast-growing sport in the U.S. and around the world. Sled hockey is played like traditional hockey on a standard rink with regulation-sized goals, six players per team, and three fifteen-minute periods per game. Players sit in specially designed sleds that rest on skate blades. They use two short hockey sticks with blades on one end to control the puck while using metal picks on the other end of the sticks to propel their sleds across the ice. Sled hockey is fun and energetic at every level; it is fast-paced and every bit as physical as traditional hockey when played at the highest levels.

Colorado Sled Hockey (CSH) was formed in 1995 and, in 1996, the team joined with the Colorado Avalanche to become the first NHL-affiliated sled hockey team in the country. Since then, CSH has expanded to include the Little Avs Junior Sled Hockey program, while seeing the adult Avalanche Sled Hockey Team capture multiple Midwest Sled Hockey League titles. In 2010, the Colorado Avalanche Sled Hockey team again lead the country in the formation of the first NHL Sled Classic Tournament which hosted only teams associated with their NHL franchises. The inaugural year saw 4 teams participate. In 2014 there were over 30 teams in three different division. The NHL Sled Classic is the highlight tournament of the year. The adult team toped the country and brought a national championship back to Colorado in 2011 and continues to be one of the nation’s model programs. 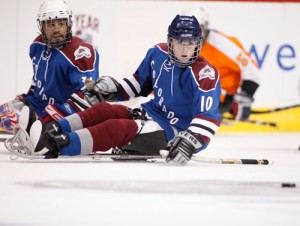 Who is eligible to play sled hockey?
Sled Hockey is played by people with physical disabilities or lower body impairments. Such participating athletes have such disabilities as leg amputations, spinal cord injuries, spina bifida, cerebral palsy, or other such impairments. If you have a question about your eligibility, please do not hesitate to contact us.

Can I play sled hockey even if I don’t have my own equipment?
Colorado Sled Hockey has sleds, sticks, pads, helmets and any other equipment a player will need to try sled hockey for the first time.

Who do I contact if I want to try sled hockey?
For more information on how you can participate or volunteer for the Colorado Sled Hockey Association, contact Bruce Grandchamp at bruce.grandchamp@lewan.com or call at 303-435-6460. 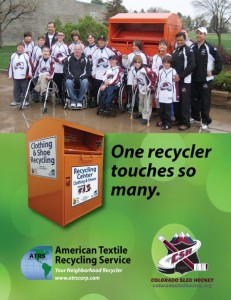 Look for the Orange Boxes with Colorado Sled Hockey

How can I support the Colorado Sled Hockey Association?

To help these amazing athletes, and to help YOU help them, American Textile Recycling Services (ATRS) has arranged textile recycling units throughout the state of Colorado. When you do your Spring Cleaning, or closet organization, just put the clothes and shoes into one of ATRS CO recyclers, and wah-la! Money for Colorado Sled Hockey! So…get organizin’ and get to a Colorado Sled Hockey game and see how great it is! ATRS, Recycling Today, For A Greener Tomorrow!

You can also donate directly to PayPal, https://paypal.me/cosledhockey.

Thank you for your support.