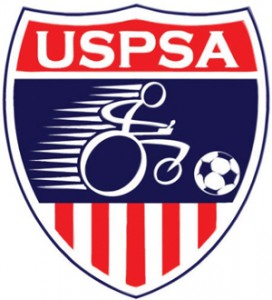 Power soccer is the first and fastest growing competitive team sport designed specifically for power wheelchair users. Participants include persons with quadriplegia, multiple sclerosis, muscular dystrophy, cerebral palsy, head trauma, stroke, spinal cord injury and other disabilities. Power soccer combines the skill of the wheelchair user with the speed and power of the chair itself to create a challenging and entertaining game.

The game is played in a gymnasium on a regulation basketball court. Two teams of four power wheelchair users attack, defend, and spin-kick a 13-inch soccer ball in an attempt to score goals.

The team will be practicing in the fall and spring at different gymnasiums. If you are interested in playing, coaching or volunteering for this sport, contact Brian Broyles at broylesfx@gmail.com.